Welcome to my experimental study looking at the making of an ancient Egyptian eye ointment for better vision. The preparation of the ointment is described in a magical papyrus from Thebes dating to the late 2nd or early 3rd century. 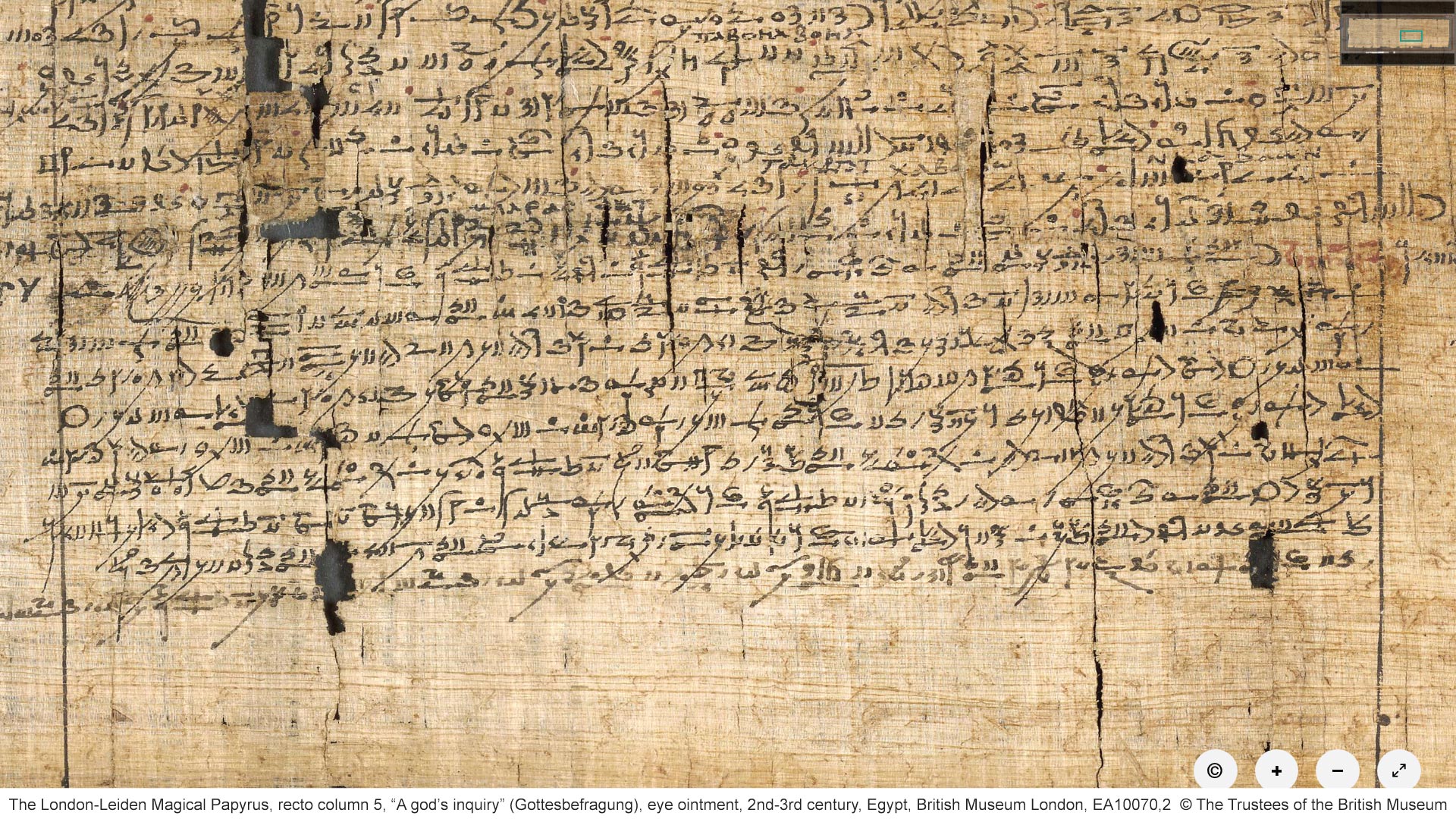 The ointment is used during a lamp divination in which a god will appear behind the lamp to answer whatever the practitioner asks about.

An online search showed me that there was a discussion going on during the second century about a misconception of the bean in an older text: According to the Roman essayist Aulus Gellius some verses of the philosopher Empedocles of Akragas were misunderstood: When he counselled men to stay away from „beans“ it was meant symbolically, not literally, meaning to stay away from sexual excess. A little bit later Diogenes Laërtius, a biographer of Greek philosophers, claims that Aristotle pointed out the similarity of the bean to the testicle. 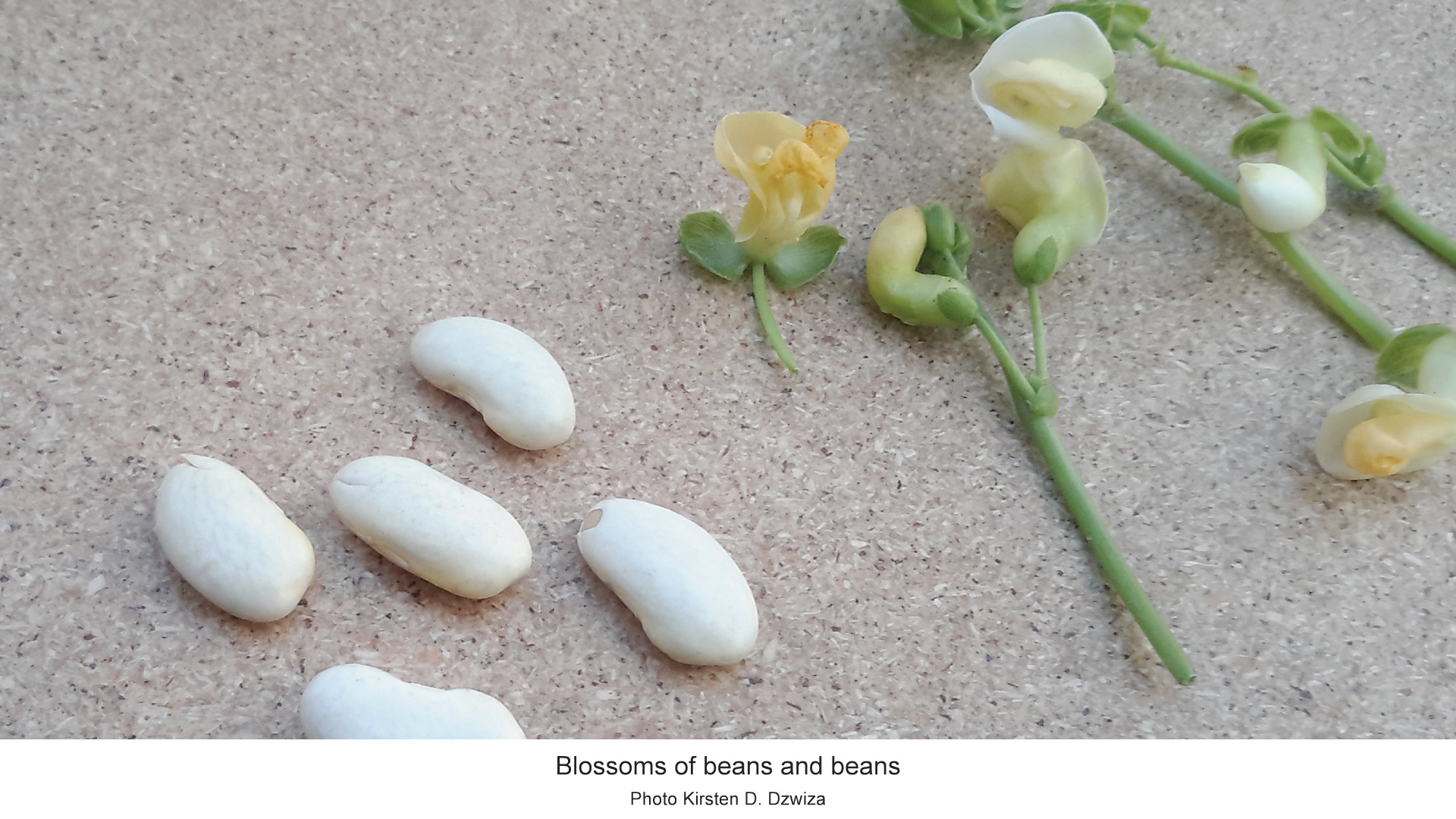 It seems that, what the author of the ancient eye ointment describes might actually be the process of a bean sprouting.

And that is what I want to find out:

What happens if you follow these 1.700 years old instructions?

I started an experiment on August 19th 2022 and made an introuctory video in which I provide a new translation of the ancient Egyptian eye ointment preparations. If you prefer to read the text yourself you can find it here.

Images of the experimental set-up

The entire set-up consists of two clay pots with lids, three glasses with lids, fresh bean blossoms and beans. I got the blossoms from a friend who grows beans in her garden. 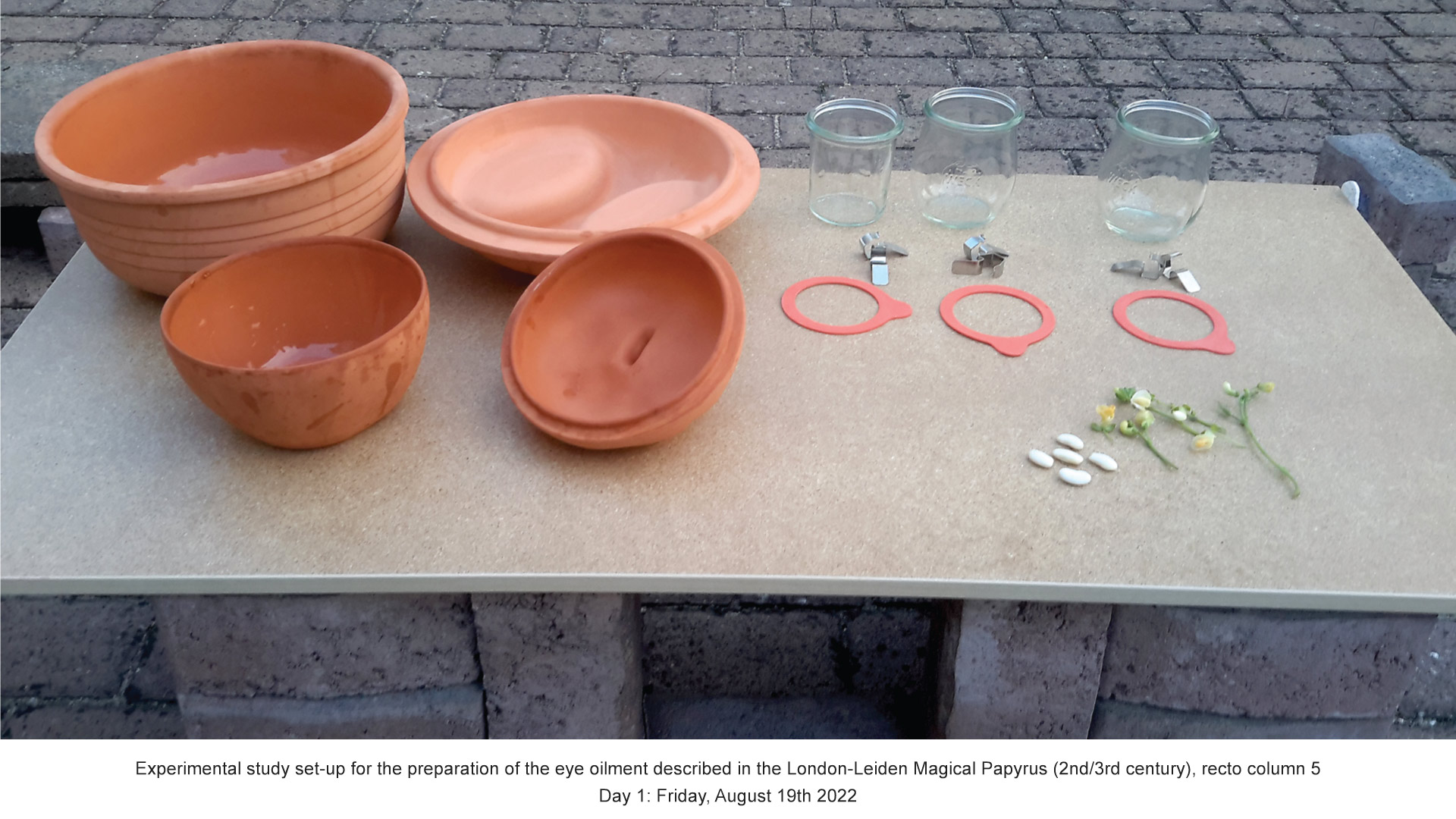 The blossoms of fresh beans and beans.

Three glasses filled with water. I put fresh bean blossoms in two of them and actual beans in the third one (middle). 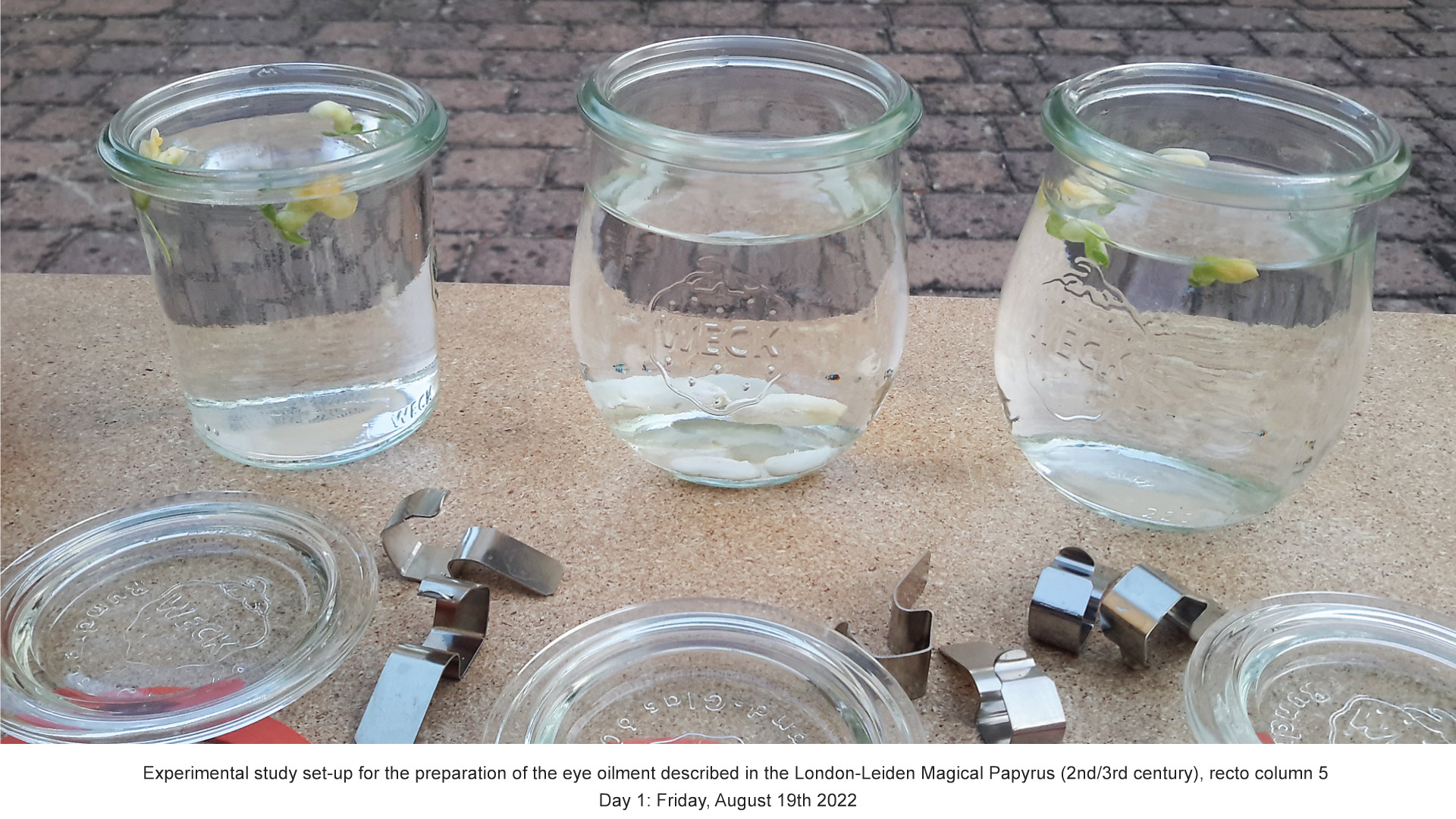 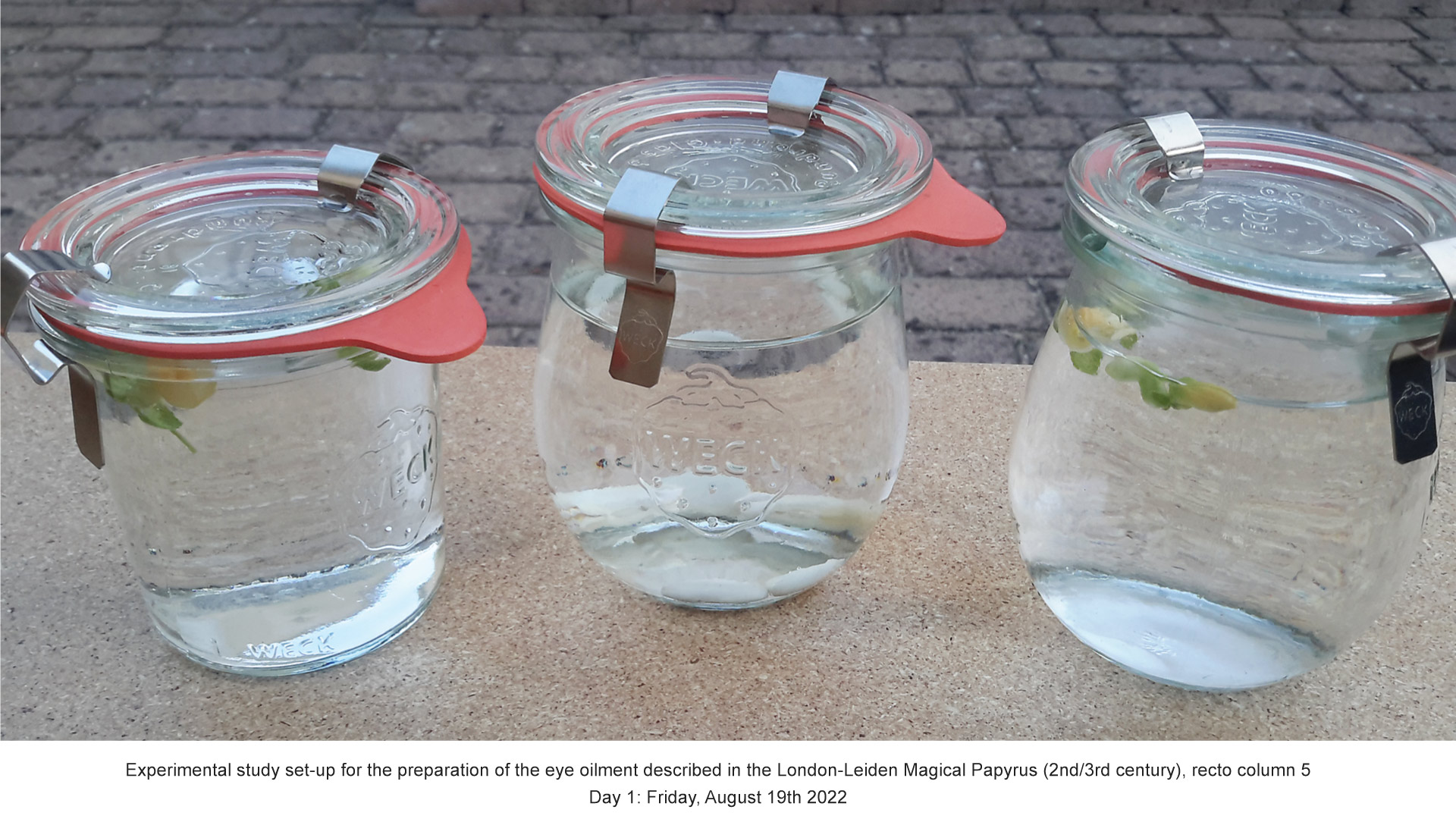 The „dark place“ to store the glasses for 20 days: My storage place for sewing stuff. To the left is cotton, the glasses will be stored there, wrapped in layers of cotton. 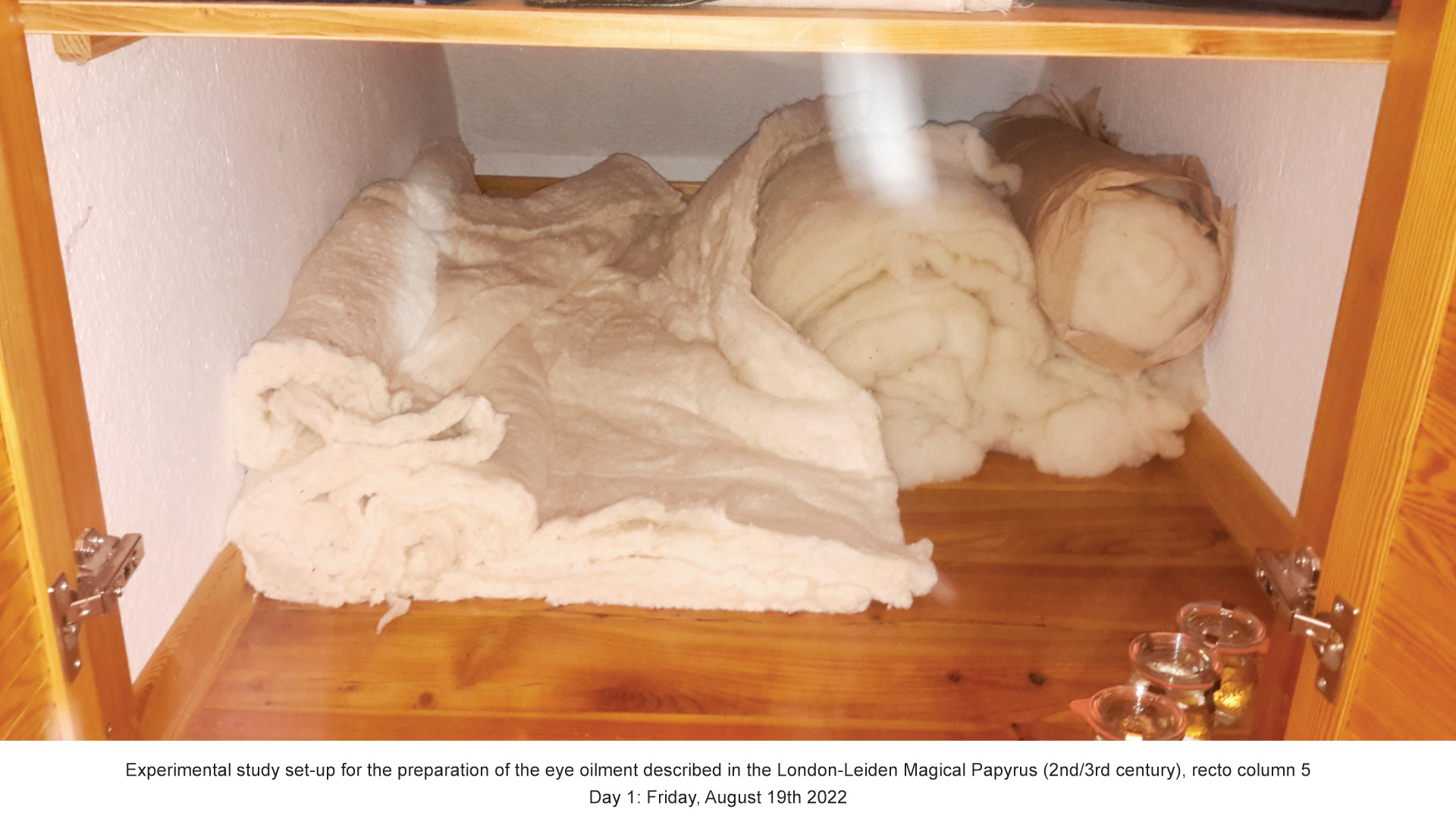 Here are the three glasses in the cupboard and on the cotton. 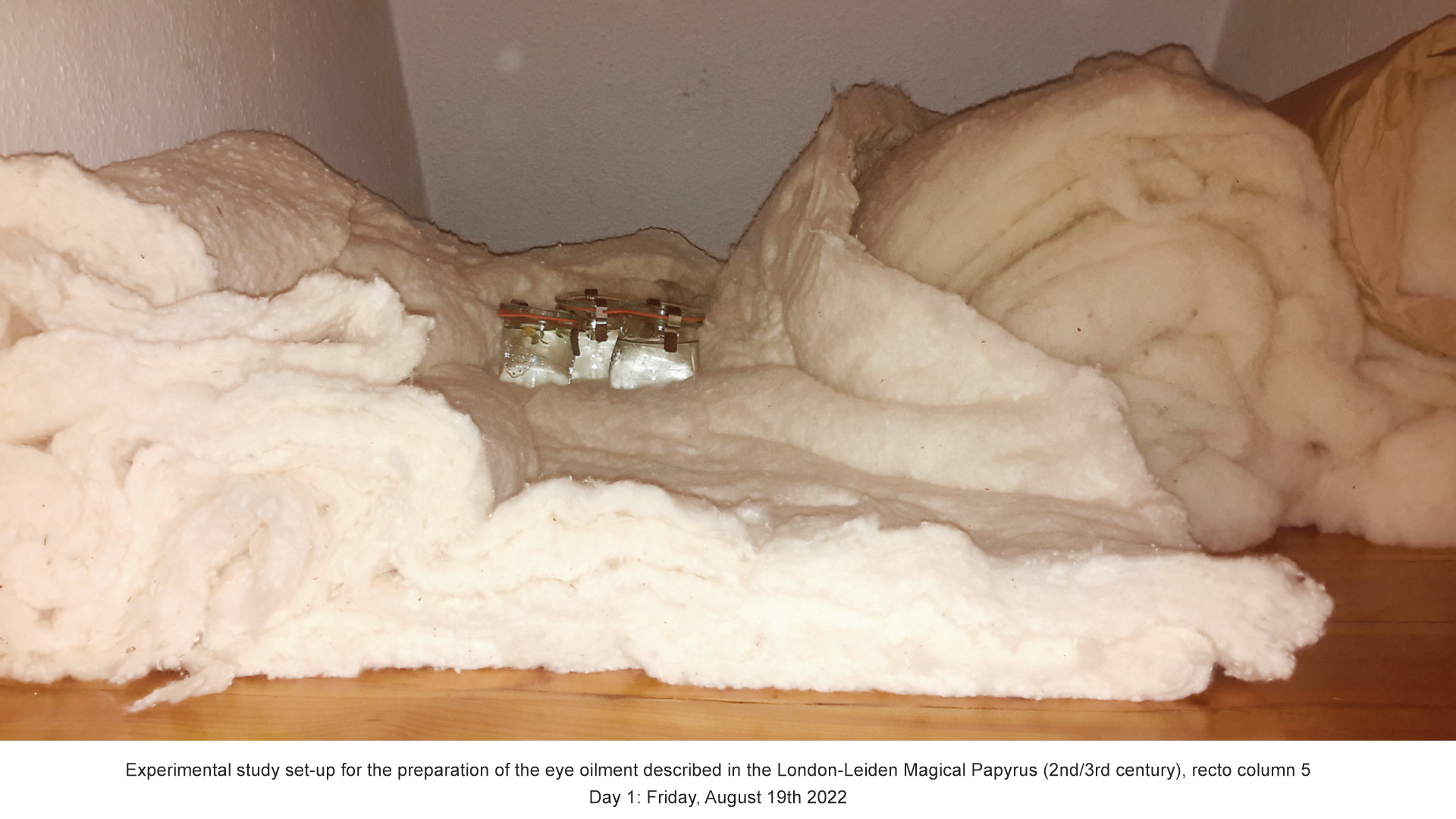 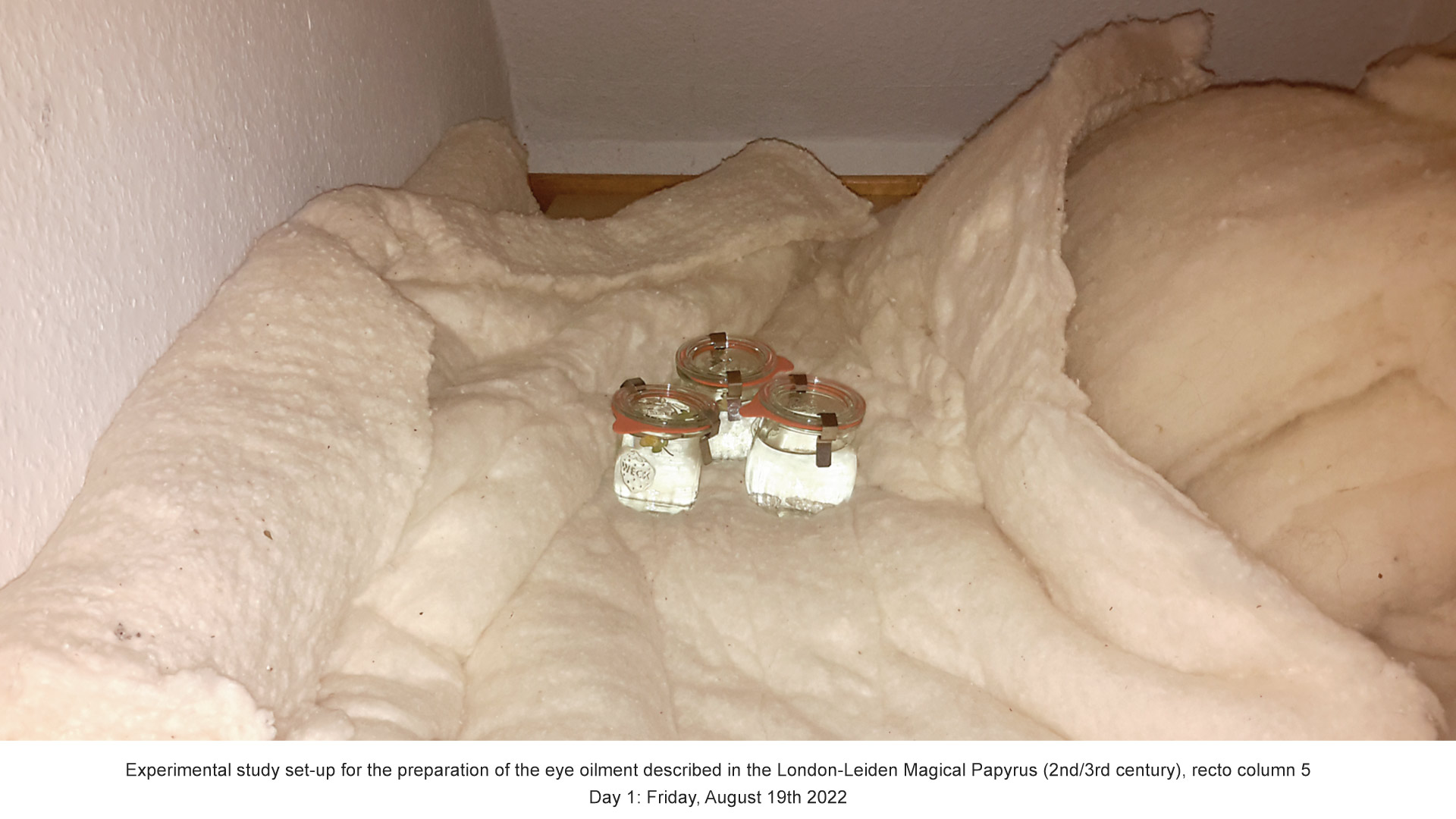 And here are the glasse wrapped in multiple layers of cotton. 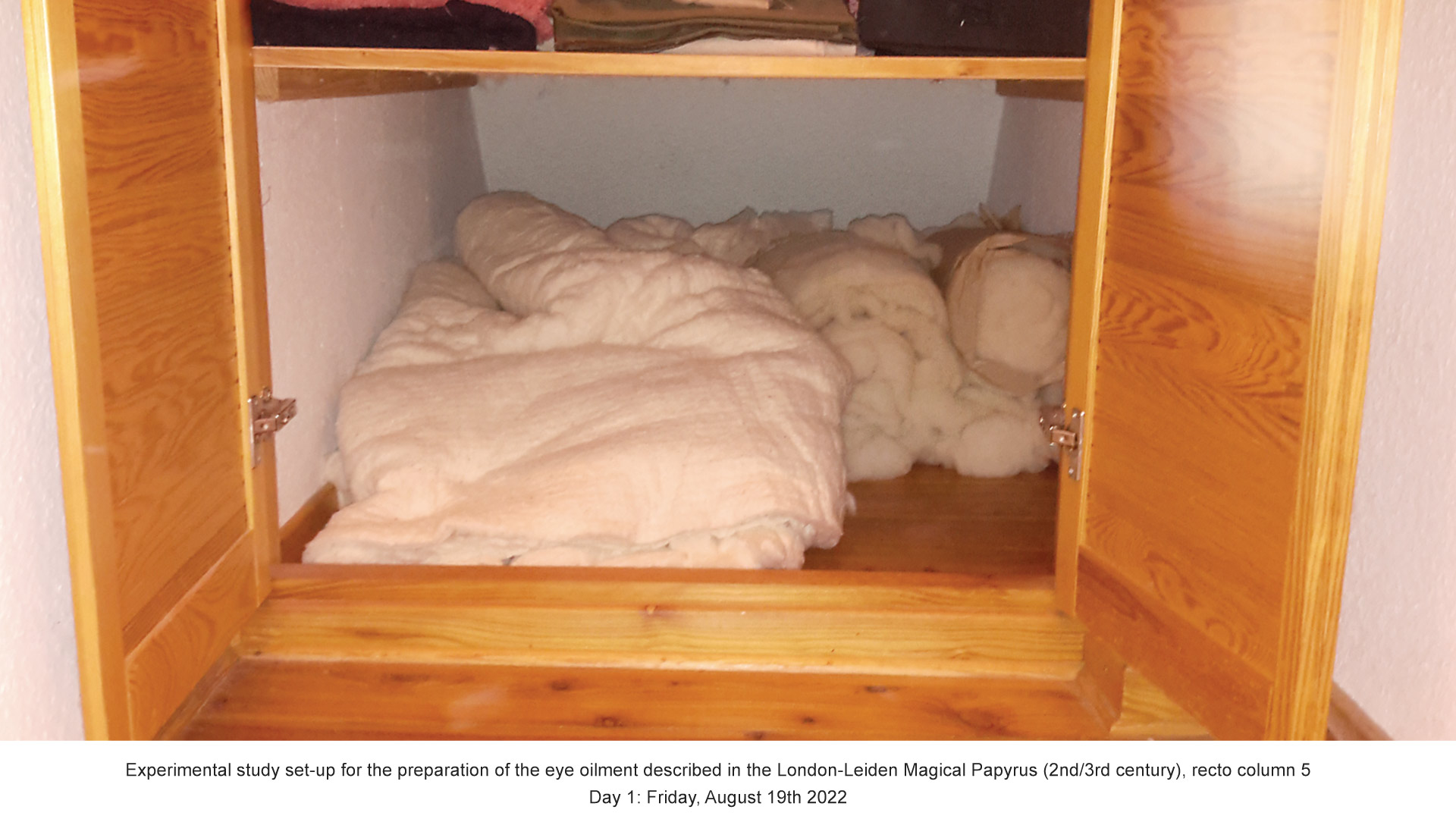 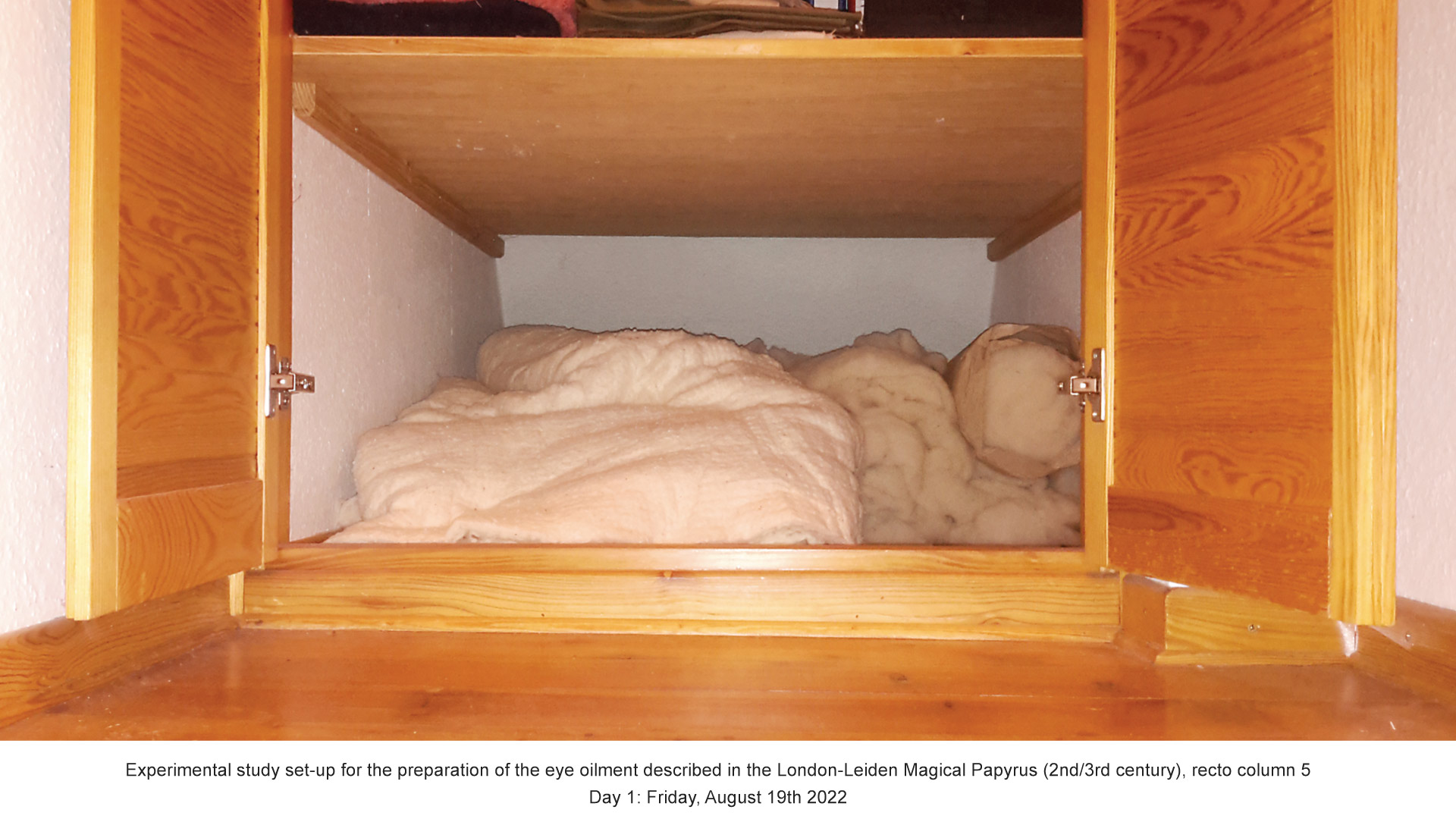 And that’s the cupboard. it will be closed for 20 days now. I am really curious about what there will be on September 8th! 🙂 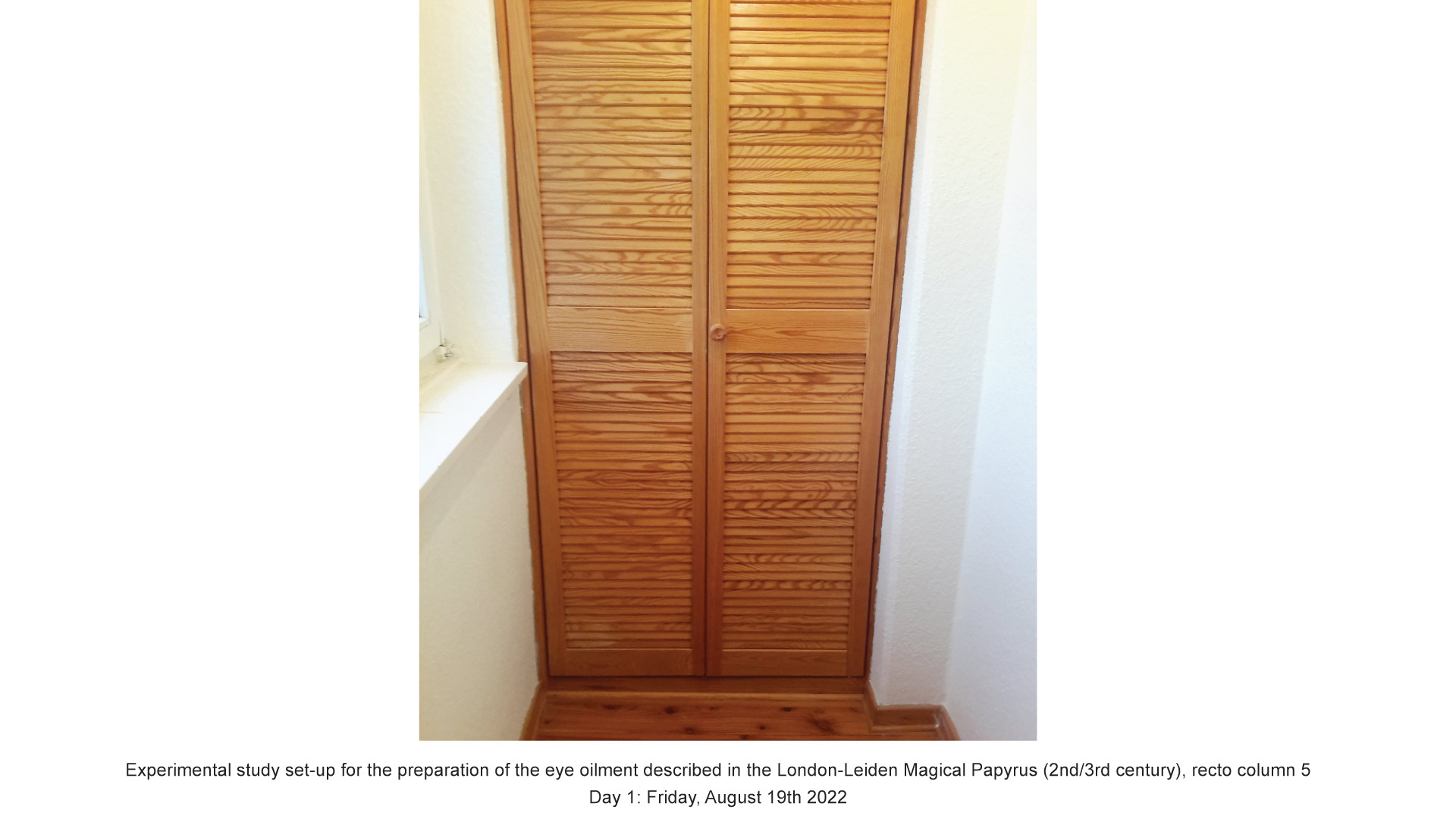