This bronze amulet was created to protect its owner against evil demons and enemies. To create and shape the power of the artefact, Gnostic, Christian and Jewish elements are combined in imagery and writing, complemented by magic signs and Christian as well as Jewish symbolism.

The two Christians Sisinnos and Bisisinnos are invoked together with Solomon and the four archangels in the Greek inscriptions. In addition to these inscriptions the amulet is incised with a mixture of Christian elements on one side and Gnostic elements on the other. The first editor A. A. Barb suggested (with questionmark) an interpretation as a wedding gift based on one of the scenes depicted on the Christian side.

The Christian side is well preserved while the Gnostic inscriptions are partially damaged. The amulet is dated to the sixth century but nothing is known about its provenance.

Christian side of the amulet 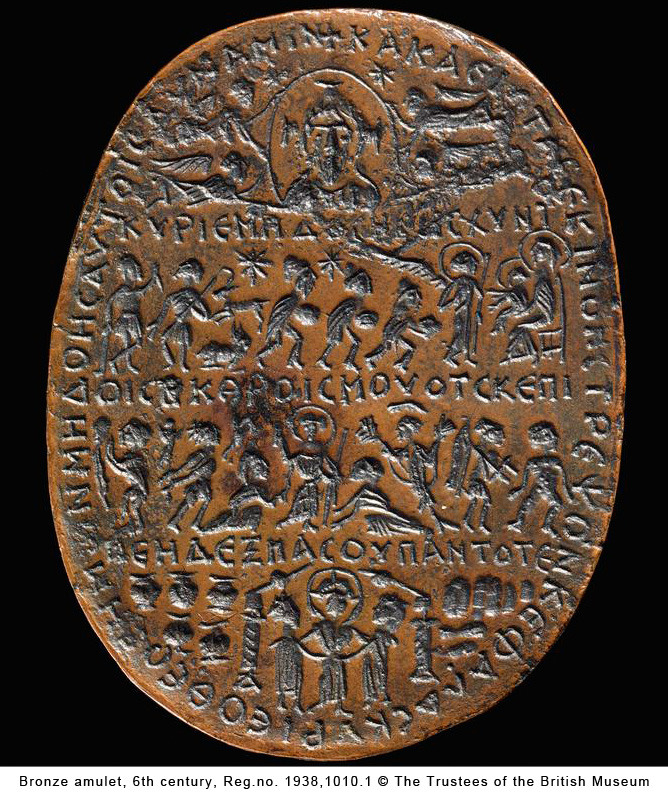 The Christian side is inscribed with four horizontal rows of New Testament narrative imagery, three lines of inscriptions and an inscription along the outer rim encircling the iconography.

The three lines written in Greek read:
„O Lord, give not strength to my enemies as thy right hand protects me everywhere!“

The inscription along the rim reads:
„Turn evil unto the heads of those there, O Lord our God, do not give them power!“

The first editor of this amulet, A. A. Barb, concludes that: „These invocations, in the language and style of the Septuagint, could just as well be Jewish as Christian, but the latter element is added abundantly by the figures.“ (Barb, p. 11).

Iconography in the top row:
The top row shows a bust of Christ in the centre with cross-shaped halo in an oval (mandorla) carried
by four flying angels with an eight-rayed star on either side above them. This is interpreted as a depiction of the bust of Christ being carried to heaven.

Iconography in the second row:
The second row starts to the left with a group of two shepherds. The left one is resting on a staff and raising his hand towards a large star, the other shepard is facing him with a pedum on his shoulder. There are two ewes behind him underneath a star. Following to the right is the scene of the Adoration of the Magi led by a star and preceded by a winged angel with halo and sceptre. The Magi are bringing their gifts to the child held by his enthroned mother. Both, mother and child are depicted with a halo.

Iconography in the third row:
In the centre of the third row Christ is standing between two kneeling women. He is depicted with halo, sceptre and raised right hand. The woman on the left touching the hem of his garment is interpreted as the woman healed of the issue of blood, the woman on the right might as the
Canaanite woman interceding for her daughter.

Further to the right is Zacchaeus in the tree-top, the man healed of the palsy carrying his bed,
and another man characterized by the spots on his naked body as a leper. To the left of the centre group there is a naked man and with his hands tied(?) behind his back. He is interpreted as  the demoniac raving, with two potentially evil spirits in the air to his left and to his right side, seeming to just leaving him.

Behind this demoniac to the very left of the third row is a depiction of the blind man washing his eyes in the waters of Siloam.

Iconography in the fourth row:
The bottom row shows Christ with a cross-shaped halo, standing in a building (some kind of aedicula)  joining a couple in matrimony. The five amphorae to the left of the marriage scene are interpreted by Barb (p. 12) to extend the subject to the Wedding of Cana, and the five(?) loaves or baskets and two fishes to extend the whole group to a symbol of the Eucharist. Barb adds: „On the other hand two verses in the Epithalamiumo f Paulinus of Nola show that the miracle of Cana served as a symbol of Christian marriage and it seems not unlikely that our amulet was intended as a wedding present.“

The Gnostic side of the amulet 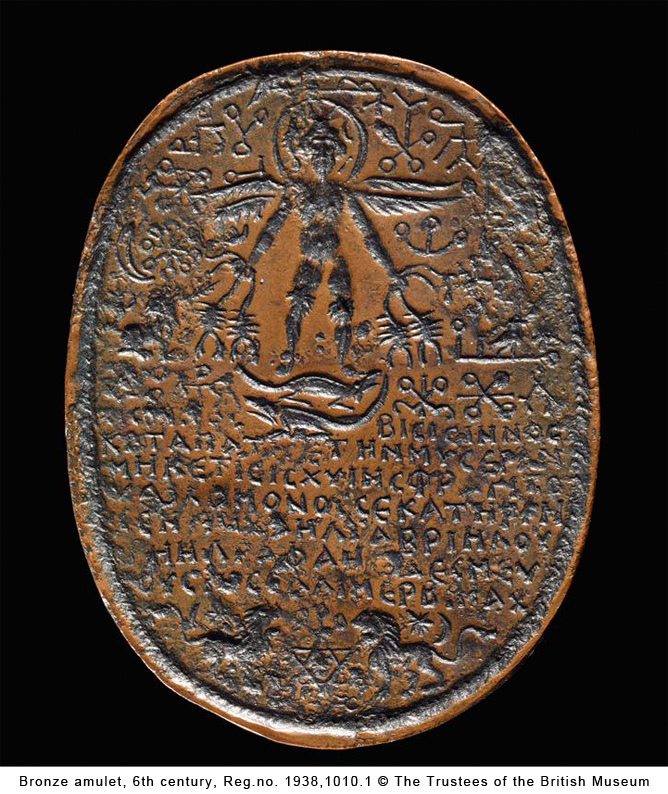 In the top centre of the Gnostic side stands a four-winged male figure with a halo, standing on two crocodiles and holding two scorpions in each hand. His knees are decorated with lion masks. The iconography resembles the type of „Horus on the crocodiles“ which is popular in ancient Egyptian and Greek magic.

The figure is surrounded by charactêres, ancient magic signs, the vast majority of them havin ring endings. To the left of the figure, in the midst of magic signs, is an animal which Barb (p. 14) interprets as a lion with maybe a branch in his mouth and accompanied by a bird(?).

Above the potential lion is the crescent symbol accompanied by the eight pointed star with ringendings. It seems quite clear that this sign, which is one of the most often attested charactêres in ancient Egyptian, Greek and Roman magic, here represents the sun.

Barb interprets the sign directly left to the crocodiles as the Christian monogramm of Christ but this is doubtful for several reasons. The most obvious ones are that the top part of the Greek Rho is more likely the right ring of a magic sign, which are predominantly engraved symmetrical as can easily be observed here on the amulet. This is supported by the fact that there is no line engraved that would connect this presumed Rho-head with the horizontal or the vertical stroke underneath it. In addition, a Christian wouldn’t fit into the iconography of this side of the amulet.

The iconography to the left of the figure at the right side of the amulet is partially destroyed. Barb (p. 14) suggests an interpretation as an ibis standing on a magic sign. This would be a unique depiction, magic signs do not occur in any source with an animal standing upon them in a way that the animyl would constitute a part of the sign. I wonder if the association with an animal concerning the remaining traces here are just due to our brains trying to make sense of strokes and suggesting patterns according to our knowledge and experience. I would rather think that a depiction of an animal was likely engraved above the signs where the area is destroyed today. But the remaining traces there seem to indicate straight lines and rings rather than the homogenic shapes of an animal.

The iconography is then surrounded by the Uroboros along the rim of the amulet, in contrast to the iconography of the Christian side which is encircled by an inscription. The purpose seems to be the same: Protection, so that nothing from the outside can harm what is inside.

Seven lines of the Greek inscription
Sisinnos Bisisinnos, tread down the abominable one that she should not have strength any more. The Seal of Solomon has annihilated thee. Michael, Gabriel, Uriel, Raphael fetter thee. Alimerbimach!

Underneath the Greek inscription
In the centre right underneath the inscription a hexagram is depicted, the  star of David, flanked by two lions, and above each of the two lions a crescent and an eightrayed star. At the top of the Hexagram is a symbol consisting of three strokes with ring-endings, often seen as a kind of „crown“ in Coptic magic.

The Jewish and Christian elements in the inscription and iconography of this bronze amulet are combined with the Egyptian figure of Horus. „Evidence for the fact that the figure of Horus was used in early Christian iconography for our Saviour was assembled years ago by W. Drexler.“ (Barb, p. 15)

„Christ together with Sisinnos-Bisisinnos, assisted by the archangels and the powerful ’seal of Solomon‘, is asked to ‚tread down‘ the evil demon. While we have Christ shown in the
shape of Horus we might see the ’seal‘ in the Hexagram between the two lions.“ (Barb, p. 16)

This publication includes many useful references worth reading when you are interested in the symbolic meaning of the iconography of this amulet.