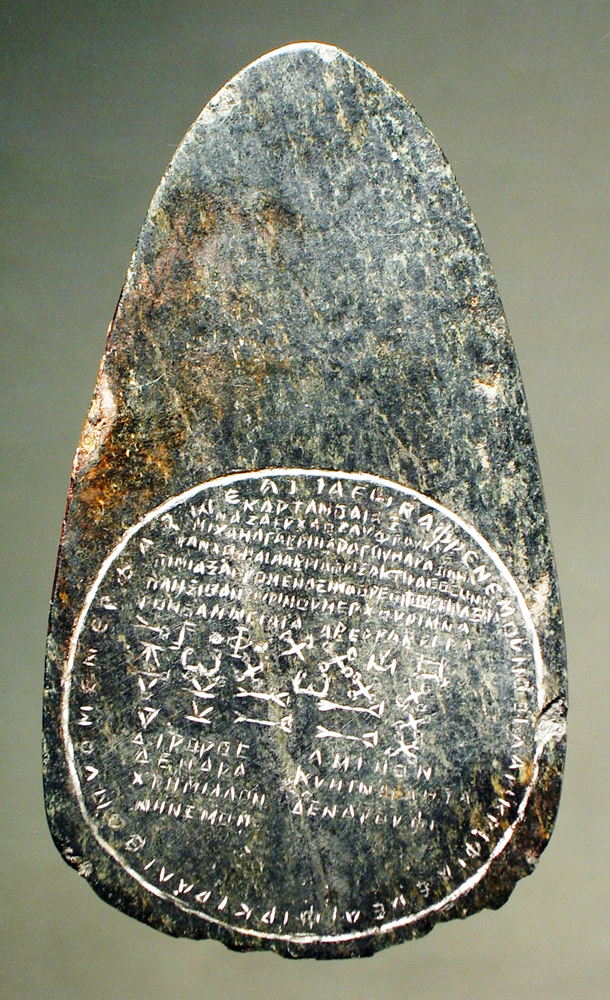 This stone is the smallest one of the three famous inscribed stones from the toolkit of a magician from Pergamon. It is of a black shiny material with green inclusions, completely polished and it was inscribed on both sides most carefully by a practised hand. It is the only stone of the three stones with a perforation for a thread or strip.

The inscription consists of secret names and words we don’t understand today, of magic signs, of epithets and of the names of four archangels: Michael, Gabriel, Raguel and Raphael.

This small stone and one of the two larger stones were also inscribed with „Pai Phtha Phôza“. While these words have been regarded as voces magicae, magic words, they also occur on a gold lamella (a thin sheet of gold) from Greece dated to the second century, and here they are explained as one of Aphrodite’s names (see for the gold lamella Roy Kotansky, Greek Magical Amulets (1994), 216-219, no. 40).

I analysed the inscriptions of the three stone at the Antikensammlung Berlin and it turned out that they were made by two different people. The sequence of magic signs was transmitted by the first practitioner to the second practitioner who modified this sequence by adding new signs in two spots.

The smallest stone of the three stones was inscribed by a practiced hand and served as the template for the larger stones, while the engraver of the larger two stones wasn’t as experienced in engraving stones with tiny letters and signs.

The ensemble of these three stones is unique in the archaeological record.

The white colour of the inscription is not ancient. It is chalk that was rubbed into the inscription to make it easier to read, a common practice during the 19th and early 20th century.

The stone you can see here is stone #1 in my publication.

Kirsten D. Dzwiza, Insight into the transmission of ancient magical signs: Three textual artefacts from Pergamon, in: MHNH, International Journal of Research on Ancient Magic and Astrology, 15 (2015), 31-56. You can Download my paper here from my blog.